CR-POWER The technology to change biomass to energy and useful resources: will be able to contribute to the continuation for sustainable earth.

In 18th century, the invention of steam engine promoted the Industrial Revolution and caused modern society. Since that time, the human being has developed the society of civilization by having been sustained by the fossil fuel.However, the use of fossil fuel derived from CO2 in the air of the past earth* increases CO2 in the air of the present earth* and thus, it has been causing global warming, leaving serious damages to appear such as sea level rise , heavy rain and abnormality of ecosystem.

The world is now pressed to restrain from emitting CO2 of the past earth in the air and instead, the world is working on the utilization of natural energy such as sunlight, wind power and the development of technology for underground storage of CO2.

We worked on the development of highly efficient gasification power plant : CR-POWER and succeeded in bringing it to the commercial level by integrating knowledge of the consultant for the waste and study results of the universities The CR-POWER* which has ability to change all of biomass carbon to the fuel gas reduces emission of CO2 of the past earth and also it enables preservation of the earth environment and life and industrial activities in harmony.

In 22nd century, the earth society will be changed to the nature-coexistent society sustained by the biomass energy. 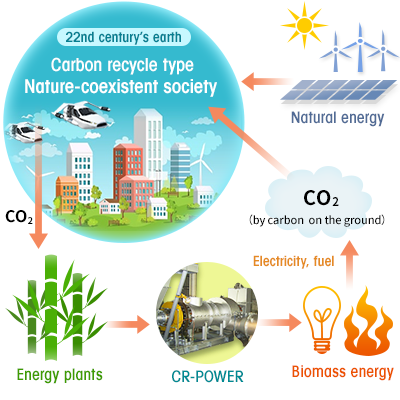